The term “inhalants” refers to a group of products that produce fumes or vapours that can lead to intoxication when inhaled.

There are a variety of inhalants that produce volatile vapours which affect the brain if inhaled. The chemicals are considered depressant drugs. They include solvents, spray paints, glues, cleaning fluids, and many others. Fumes or vapours are often inhaled directly from cans, bottles, tubes, or other packages. The fumes or vapours contain chemicals that are poisonous to humans if consumed. Typical chemicals found in various products include: 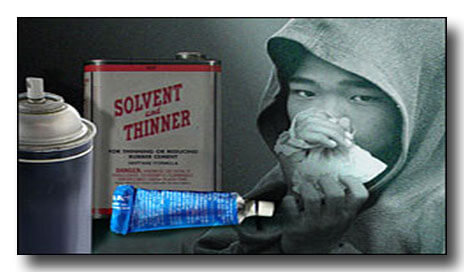 The chemicals are extremely dangerous to humans when inhaled directly and have many of the same effects as illicit drugs. Though inhalants are primarily used by teenagers, they are also used by adults who consume illicit drugs and need a quick “fix” when unable to access drugs of choice.

Even a single use can cause significant health issues. They are depressant drugs that slow down brain and nervous system activity. They can also lead to a slowdown in breathing and heart rate.

Most inhalants are common products used in homes and businesses. Examples include the following:

Inhalants work within five minutes and quickly make a person feel light-headed. Some people feel euphoria, while others may experience agitation and anxiety. When chemicals are repeatedly sniffed or huffed, the drug user may experience hallucinations. Long-term use of inhalants will often have memory problems, mental confusion, mood swings, and feelings of paranoia.