Cannabis contains psychoactive chemicals and other related compounds. It is one of the most common illicit drugs used in the world. The psychoactive chemicals bind to cannabinoid receptors in the brain. The brain produces chemicals, like anandamide, that activate the cannabinoid receptors naturally. THC mimics the natural chemicals and activates the endocannabinoid system, a neural communication network. This particular brain network influences reward, memory, thinking, time perception, thinking processes, concentration, and sensory perception. When the chemicals over-activate the endocannabinoid system, the “high” is produced.

The effects of cannabis usually peak within 30 minutes. It is an addictive drug, and long term users may experience withdrawal symptoms when cannabis use is stopped. 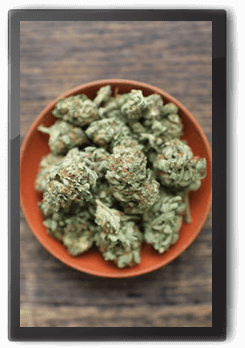 Cannabis Sativa, a hemp plant, is most commonly used as the street drug of choice. Cannabis Sativa contains higher amounts of THC compared to Cannabis Indica so is more mood altering.

The leaves and flowering shoots of both species contain the Cannabinoids Isomeric Tetrahydrocannabinols (THC), Cannabinol (CBN), and Cannabidiol (CBD).

Cannabis or marijuana refers to the dried flowers, stems, leaves, and seeds of the cannabis plant. The dried plant material is rolled into cigarettes that can be smoked (joints). It is also smoked in pipes, water pipes, and cigars emptied of tobacco that is mixed with marijuana and placed back in the cigar paper. Sometimes, the plant material is used as a food ingredient or is brewed as tea.

Nationally, Australia has adopted a harm-minimisation approach to cannabis use. It is illegal to use, possess, grow, import and export the drug, but each state and territory determines the penalties for offences. In Western Australia, it is against the law to cultivate, use, possess, manufacture, or sell cannabis. It is also illegal to possess pipes and other smoking tools that contain any detectable amount of cannabis. Shops are not allowed to sell or display cannabis smoking paraphernalia.

People apprehended for possession or use of small amounts (less than 10 grams) of marijuana may be required to complete a Cannabis Intervention Session when the police issue a Cannabis Intervention Requirement (CIR). However, this is only applicable if the person is not found to be in possession of or cultivating cannabis plants or possessing cannabis resin, hash oil or other types of cannabis derivatives. Those cases and any cases the police decide is possession of cannabis with intent to sell will be handled by the court system. The Misuse of Drugs Act 1981 includes penalties for illegal drug use, possession, manufacture or supply and was amended to strengthen cannabis laws effective August 2011. If a person has more than 10 grams of cannabis or any cannabis plants, the penalties are $2,000 or 2 years in jail or both. If a person possesses more than 100 grams of cannabis, it is considered a supply crime, and the penalty is $20,000 or two years in jail.

The THC potency has been increasing over the last few years, meaning the drug may produce more intense side effects.