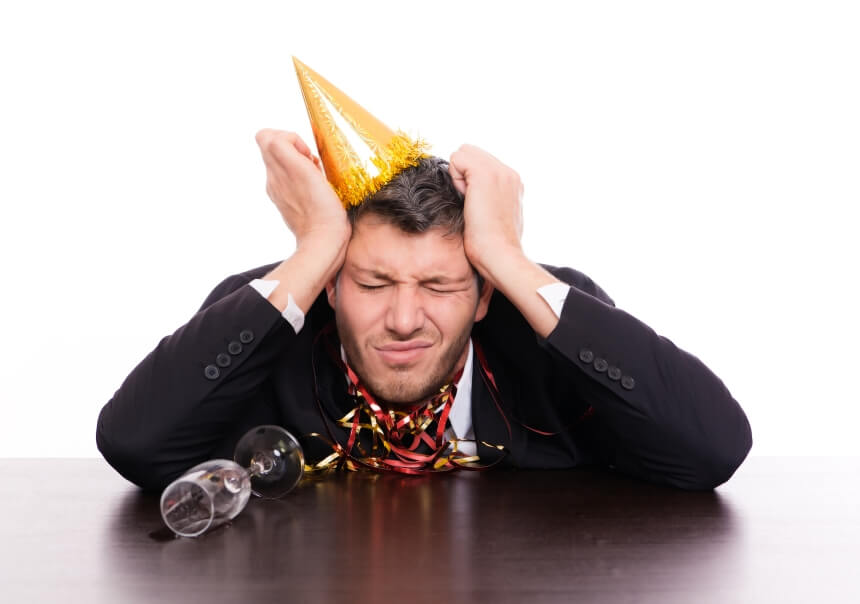 A hangover is the term used for physical and mental lingering effects caused by consuming an excessive amount of a substance. Though usually associated with alcohol, prescription and illicit drugs can also cause hangovers by definition. For purposes of this discussion, the focus is on alcohol and the impact of workers showing up for duty whilst experiencing the many potential side effects of over-consumption.

In the past, researchers have largely concentrated on the symptoms and causes of symptoms experienced whilst drinking. However, the alcohol hangover represents a set of symptoms that a person continues to experience hours after drinking has ended, sometimes as long as 24 hours later. The unproven theory until recently has been that dehydration is the main culprit, and dehydration is primarily responsible for less serious symptoms like dry mouth.

However, further research indicates that drinking too much alcohol leads to changes in the immune system and those changes are more likely the cause of serious hangover symptoms like memory impairment. In fact, studies have indicated that the central nervous system, the target of alcohol, and the immune system communicate with each other and impairment of both can lead to typical hangover symptoms. Complicating studies of hangovers is the fact that people often drink during some of the hours they would normally be sleeping, thus sleep deprivation may be another contributing factor to the severity of hangover effects.1

Hangovers present a safety risk. A study of 800 assembly workers concentrated on the relationship of hangovers and work performance. The workers admitting they had reported to work with a hangover had problems like co-worker conflicts, falling asleep, difficult completing work and feeling sick. Those workers who had worked with hangovers reported more problems than those who did not. Workers with hangovers had more incidences of supervisors saying something about work performance also.2

Hangover symptoms can vary, but most of them will impair a worker’s reaction time, ability to reason, judgment, physical coordination, and care. For this reason, even a mild hangover or the use of a small amount of alcohol or drugs in the workplace can significantly increase the risk of workplace injuries.

There has even been the suggestion that people who drink in the workplace are risk takers and thus more likely to behave in a risky manner anyway, compounding the negative effects of a hangover.3 People with hangovers experience headaches, fatigue, inattention, and impaired memory.

Physical injuries are the most serious consequences of hangovers in workplace; but the symptoms can also impact the ability of office workers to do their jobs correctly, increasing the risk of errors that can harm the business. For example, an accountant will have trouble concentrating and makes significant errors in payroll processing or critical tax entries. Hangovers increase absenteeism and health care costs, too.

No Such Thing as “Only a Hangover”

For these reasons, random alcohol and drug testing that detects substance use that may have occurred over a weekend or during off-duty time, like the night before, is valid. The employer has a duty of care to protect the safety of all workers. The worker who tells others that it is “only a hangover” does not understand the seriousness of the condition.

In industries where the risk of injury is high, employees must be mentally alert, have good physical reflexes, and able to exercise good judgment. It is critical that workers understand the role of hangovers in work performance and as a safety hazard. That message can and should be delivered in an employee training and education program.

CMM Technology works closely with employers in all industries during their selection of the appropriate alcohol and drug testing supplies. There is a variety of breathalyser devices for detecting alcohol, and saliva and urine devices for detecting drugs, available to fit budget and program needs.

3 Ramchand, Rajeev and Amanda Pomeroy, Jeremy Arkes. (2009). The Effects of Substance Use on Workplace Injuries. Retrieved from Rand Center for Health and Safety in the Workplace: http://www.rand.org/content/dam/rand/pubs/occasional_papers/2009/RAND_OP247.pdf